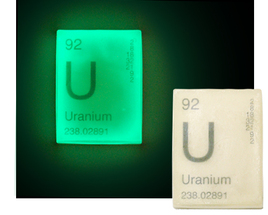 Uranium (play /jʊˈreɪniəm/ yew-RAY-nee-?m) is a silvery-white metallic chemical element in the actinide series of the periodic table with atomic number 92. It is assigned the chemical symbol U. A uranium atom has 92 protons and 92 electrons, of which 6 are valence electrons. The uranium nucleus binds between 141 and 146 neutrons, establishing six isotopes, the most common of which are U-238 (146 neutrons) and U-235 (143 neutrons). All isotopes are unstable and uranium is weakly radioactive. Uranium has the second highest atomic weight of the naturally occurring elements, lighter only than plutonium-244.[3] Its density is about 70% higher than that of lead, but not as dense as gold or tungsten. It occurs naturally in low concentrations of a few parts per million in soil, rock and water, and is commercially extracted from uranium-bearing minerals such as uraninite.

Many contemporary uses of uranium exploit its unique nuclear properties. Uranium-235 has the distinction of being the only naturally occurring fissile isotope. Uranium-238 is fissionable by fast neutrons, and is fertile, meaning it can be transmuted to fissile plutonium-239 in a nuclear reactor. Another fissile isotope, uranium-233, can be produced from natural thorium and is also important in nuclear technology. While uranium-238 has a small probability for spontaneous fission or even induced fission with fast neutrons, uranium-235 and to a lesser degree uranium-233 have a much higher fission cross-section for slow neutrons. In sufficient concentration, these isotopes maintain a sustained nuclear chain reaction. This generates the heat in nuclear power reactors, and produces the fissile material for nuclear weapons. Depleted uranium (U-238) is used in kinetic energy penetrators and armor plating.[5The price of Uranium is climbing. Although the U.S. is the largest generator of nuclear power, at approximately 30% of worldwide nuclear generation, a reactor hasn’t been built in decades. Why is uranium on the move, now at a spot price of around $73? The answer is in the developing countries, particularly China and India.

China is pursuing uranium more aggressively than ever. A typical 1000 megawatt nuclear reactor provides enough electricity to power a modern city of up to one million people, making it an attractive option for a country with a population of over 1.3 billion people. In the last year alone they have more than tripled their uranium imports, put two reactors online, and are not stopping there as Beijing has plans to build many more.

India is the other major player in the uranium market as Asia’s third largest energy consumer. It is estimated that their need for uranium will increase 10 fold by 2020, with a consumption of about 8,000 tonnes annually. They are opening domestic numerous uranium mines this year, and have signed civil nuclear agreements in six countries.

With these predicted astronomical numbers for China and India, speculation is driving the market. The price spike in 2007 was similar in that it was driven by sentiment, but very different because only a small amount of uranium actually changed hands.

When speculators see China’s commitment to invest $511 billion in nuclear energy combined with India’s long-term demand, it wouldn’t be surprising to see them running back to uranium this year. 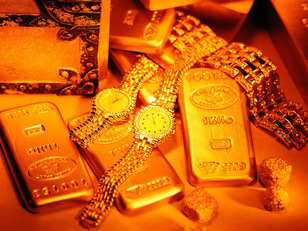 As a general scientific basis, here’s exactly what the typical individual ought to know in regards to gold - the element: gold is a chemical element with the symbol Au (that comes from the Latin: aurum "gold"). It has been a highly sought-after precious metal for coinage, jewelry, and various arts since the beginning of noted history. As a native metal it occurs as nuggets or grains in rocks, in veins or vein structures and in alluvial deposits. Less commonly, it occurs in minerals as gold compounds, in most cases with tellurium. As metals go, gold can be quite dense, soft, shiny and the most malleable and ductile pure metal available. Pure gold carries a brilliant yellow color and shine traditionally considered attractive, which it retains without oxidizing in air or water.

Most obvious to most of us, gold is without a doubt one of the metals that has served as a symbolic representation of success and a store of significance throughout history. In addition, it continues to be linked to numerous symbolisms and ideologies.

The calendar year 2008 was an easy year to remember, since it designated a serious economic change worldwide. In September of that year the global markets were on a path to what many experts considered to be the brink of a meltdown. Not too coincidentally, prior to the September crash, the buying price of gold was rising reaching a nominal high of US$1,004.38.

Gold has always been an important investment. It's been used all through history as money by the Europeans in the later part of the nineteenth century, and also by the United States until 1971. As the U.S. system has at this point transitioned from being backed by gold to a fiat currency (money which has value mainly because of government regulation or law), gold has assumed the role of the protector. As soon as money is printed when in economic uncertainty, the all round worth of money is devalued as it floods the system. The reason gold is consequently valuable in these times is that is signifies tangible asset, thus making it a hedge against inflation, deflation, or currency devaluation.

What makes gold unique to other commodities often is the role that speculation plays in its market price. In contrast to other commodities, the annual production is incredibly low when compared to accessible quantity that is stored above ground. According to the World Gold Council, of the 2,500 tons of gold mined throughout the last few years, about 2,000 tons goes into jewelry / dental production, and the rest goes to retail investor and exchange traded gold funds. Even with this limited production, the cost of gold rose Thirty percent just over 2010, a great example of how adjustments in public sentiment impact the price much more than annual production.

For those of us who aren’t seasoned economists and market analysts, we can easily glance at the trend of gold in the market to gain an overall perception on how individuals are feeling regarding the future in economic terms. Generally, we have seen that when gold grows in value, generally there is a feeling of unease. Conversely, as gold trends downward, it often coincides with a perceived return to stability in the marketplace.

All About Gorden Brent Pierce

Never afraid to roll up his sleeves to get a job done, Mr. Pierce has a deep rooted understanding of operations development from the ground up that results in practical business solutions. His no-nonsense, hands on approach is combined with an overwhelming desire to obtain performance from any specific business dynamic and makes for a successful and winning combination. Situation specific innovation and making changes quickly when performance is not forthcoming are other strengths of his management style. These attributes have been applied to literally hundreds of businesses during his career and has resulted in innumerable projects he has developed. Many who know him closely realize his multiple successes and prolific nature more resemble the life work of a team of successful businessmen rather than one.

Brent’s career corporate projects developed have concentrated on primary minerals resource exploration concentrating on, the precious metals (gold, silver, and pgm) and industrial elements (copper, zinc, uranium sectors), as well as oil and gas exploration and project development. He has also engaged in special situation and local projects such as biotech, restaurant and hospitality development, wineries, and real estate development.

A strong believer in the humanities and giving back, Mr. Pierce has contributed in a meaningful way to cancer research via the BC Cancer Society, the advancement of certain B.C. private schools, as well as sponsorship to local arts and sport. A coming theme is the formation of the Pierce Foundation that intends to develop and contribute to special charity situations - again with the same performance driven management style that he hopes will bring specific cause’s success to make a truly meaningful difference.

Brent Pierce, father of four, lives with wife Dana Pierce, in West Vancouver, B.C. He has developed and operates Pierco Management Inc., a private company from his Vancouver offices.